As the first sport-utility vehicle from the Ford Motor Company, the Bronco has become an icon of off-road history. In 1965, race car builder Bill Stoppe assembled a team of first-generation Broncos for long-distance off-road competition. They competed in the Mint 400, Baja 500, and the Mexican 1000 (later renamed Baja 1000).

When developing the officially licensed SCX10™ III Ford Bronco 4WD, Axial® engineers pushed the boundaries on ready-to-run scale crawler features, functions, and performance. It includes the key components that have made the SCX10™ III platform a success, and adds features never before found in an Axial® RTR — or any other RC vehicle. Hands down, this is one of the most detailed models Axial® has ever produced, and it’s a perfect choice for brand new scalers, experienced rock crawling enthusiasts, and everyone in-between.

Inside and out, the scale realism is unprecedented — sure to impress the most devoted Ford fans. The polycarbonate Bronco body has a molded tube cage with functional tube doors and hidden body mounts to preserve the scale lines. Fender flares and rock sliders that are true to the era also provide essential rock rash protection. Other authentic exterior details include the hood scoop, license plates, windshield wipers, and LED headlights and taillights. Many scale features are also functional. The front and rear plate bumpers, for example, are placed at the optimal approach angle for unobstructed climbing and crawling.

The realism continues right to the ground. Retro-style 3-piece beadlock wheels complement the Ford Bronco’s scale body while allowing tires to be mounted, removed, and replaced easily without gluing. Licensed 1.9 replica Falken Wildpeak M/T tires provide a solid grip for getting over rocks and trails. The roll cage has mounting tabs for additional lights and a full function spare tire.

Underneath it all, the proven SCX10™ III chassis delivers the superior crawling performance Axial® drivers have come to expect. For a lower center of gravity in addition to true scale looks, the Ford Bronco uses AR45 Straight Axles in the front and rear. The triangulated suspension geometry is tuned to work with the axles to reduce torque twist and further increase the scale looks. Tunable oil-filled shocks help drivers find the best dampening rate and offer increased bore size with more fluid volume for the best performance.

Out of the box, the transmission is set up with a third-channel Front Dig function that lets you lock the rear axle from the transmitter for a tighter turning radius. Or you can configure it for two speeds with high and low gears by moving the included Micro Dig Servo to the two-speed linkage. To use both the two-speed transmission and Front Dig features, just add another servo and a radio with at least four channels (such as the 5-channel Spektrum™ DX5).

The fully assembled RTR vehicle comes with a Spektrum™ DX3™ radio featuring exclusive DSMR® technology for superior range, response, and interference resistance. It’s also compatible with the Smart telemetry potential provided by the installed Spektrum Firma™ Smart 40A ESC/receiver. Using a Spektrum Smart LiPo pack, you can follow on-board battery capacity on the transmitter’s voltage level indicator while driving with confidence in any weather and trail conditions — the electronics are protected by a waterproof design.

With its unstoppable Axial® engineering and iconic Ford styling, the SCX10™ III Ford Bronco 4WD RTR crawler is made for adventuring in the mountains and rugged terrain. Just add your choice of suitable battery and go! 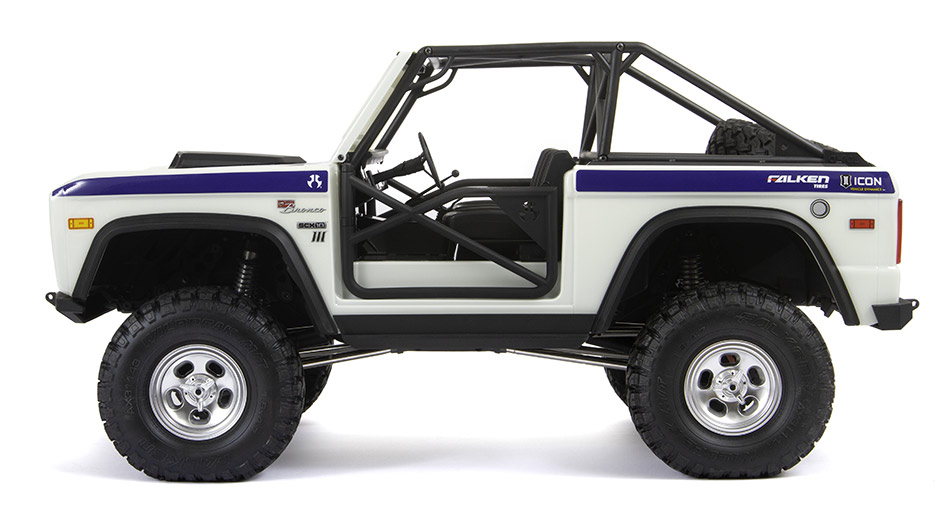 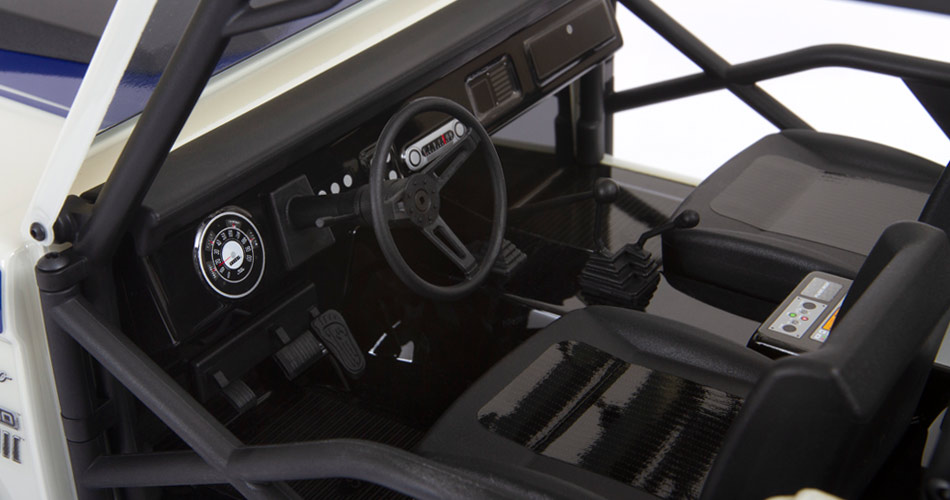 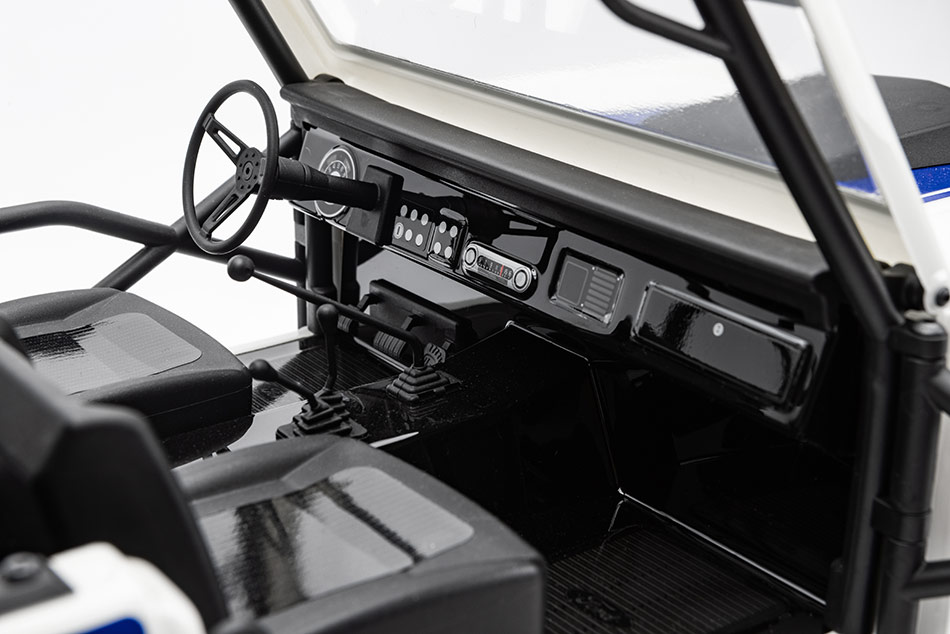 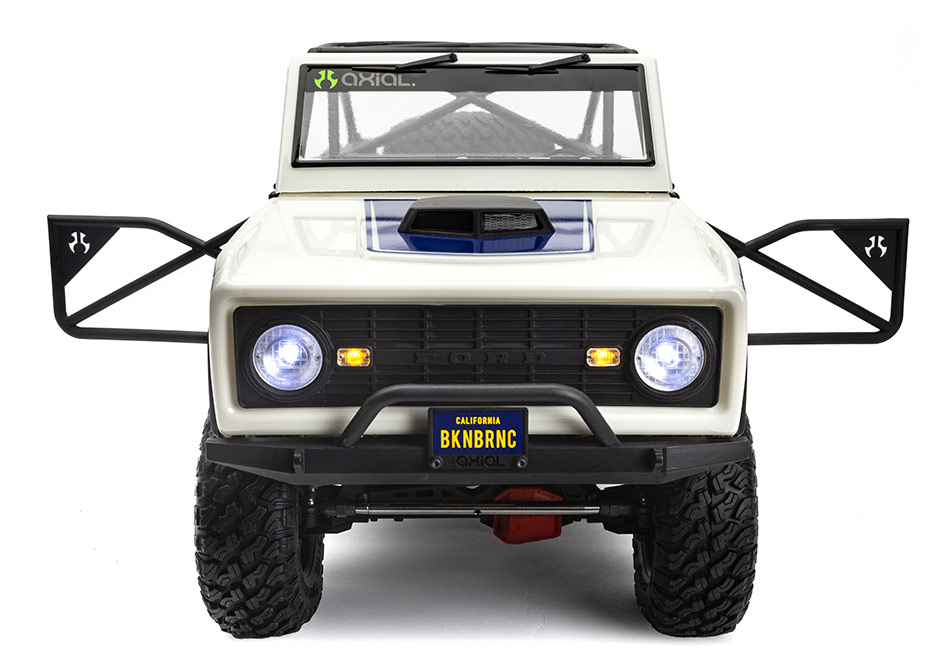 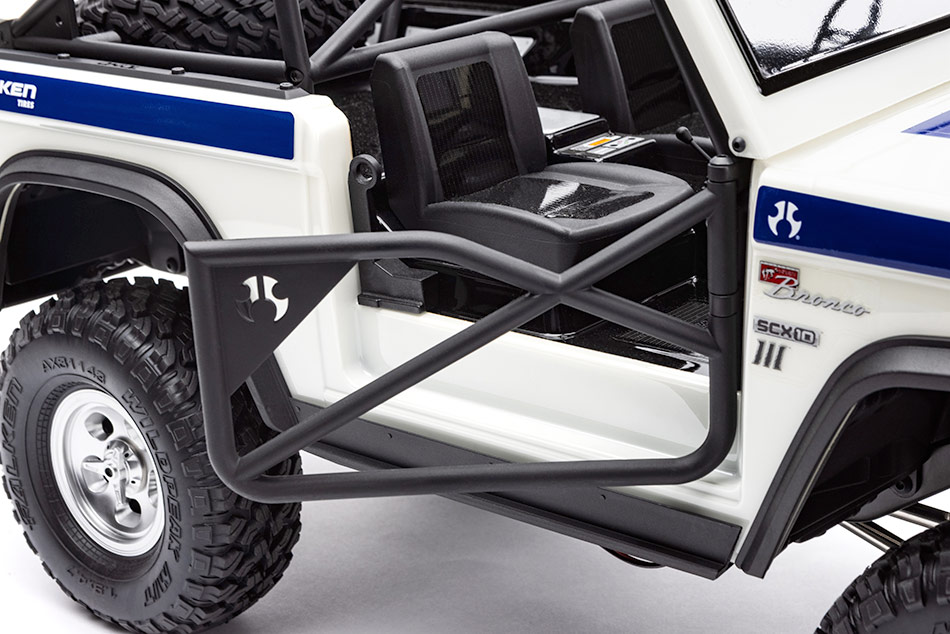 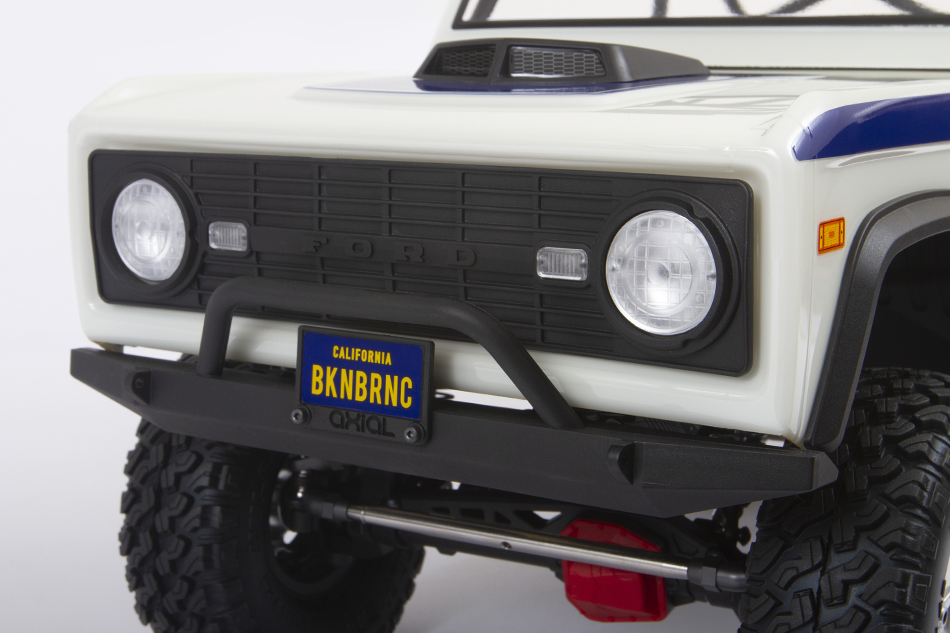 OFF-ROAD BUMPERS
The off-road bumpers have been engineered with the optimal approach angle for climbing and crawling over rocks and rough terrain. The front bumper also includes a mounting hole for a winch fairlead and aftermarket lighting. Front and rear scale license plates are installed for extra scale realism. The spare tire carrier is removable. 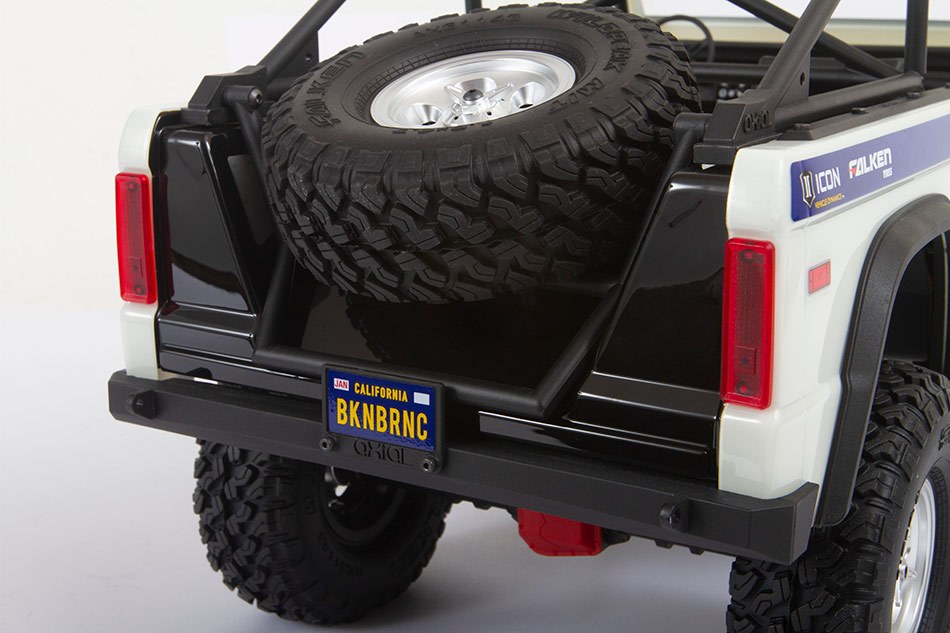 SPEKTRUM™ FIRMA™ SMART 40A BRUSHED 4-CHANNEL ESC/RECEIVER
With the Firma™ Smart 40A ESC/receiver and DX3™ transmitter, you’re equipped to experience the telemetry advantages of exclusive Spektrum™ Smart technology. Install a Spektrum Smart LiPo battery to follow vehicle battery capacity on the transmitter’s voltage level indicator. Drive with confidence in any weather and trail conditions — the electronics are also protected by a waterproof* design. 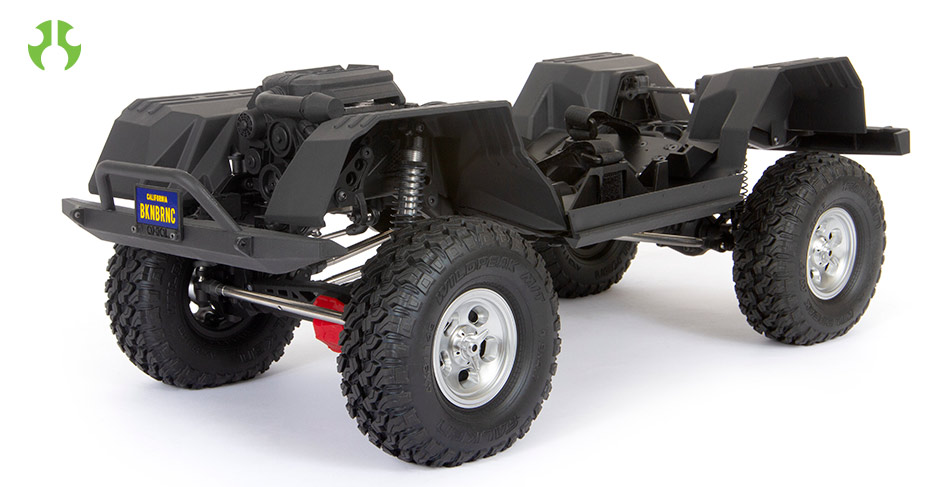 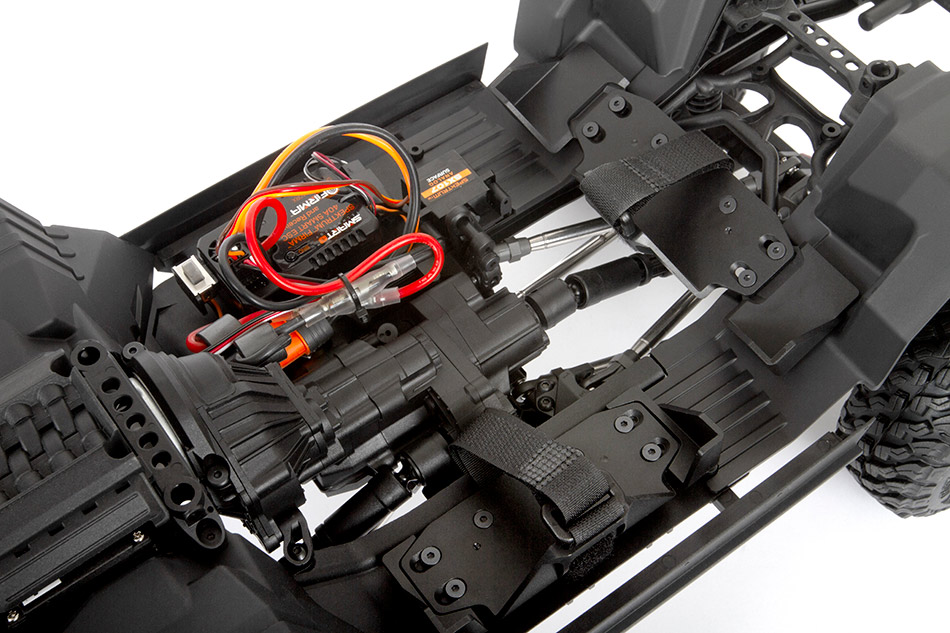 MULTIPLE BATTERY MOUNTING LOCATIONS
The SCX10™ III Ford Bronco has a standard battery tray that accepts full-size “standard” LiPo or NiMH packs. There’s space on the side rail, too, for drivers who prefer smaller size packs. NOTE: Battery not included. 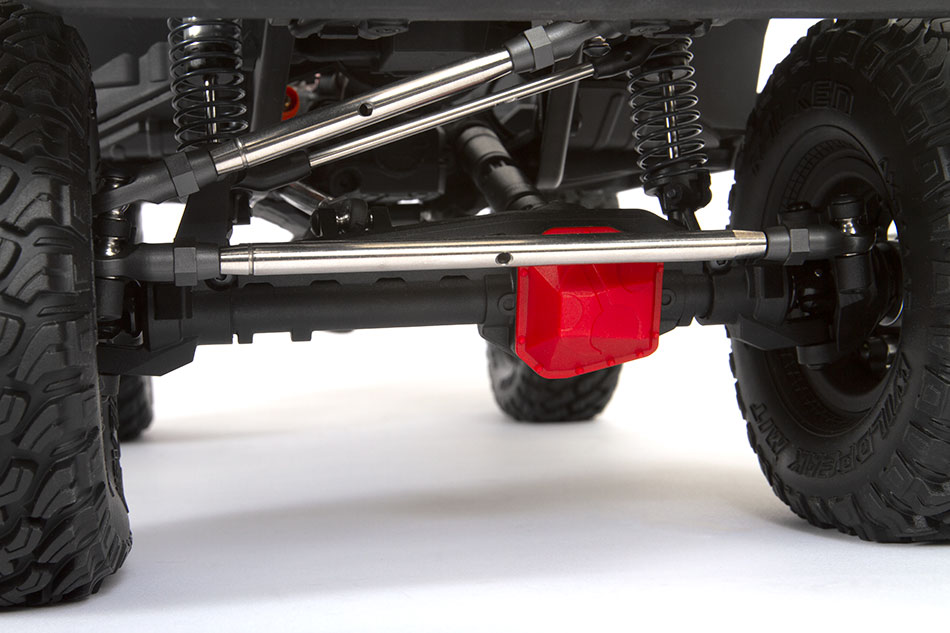 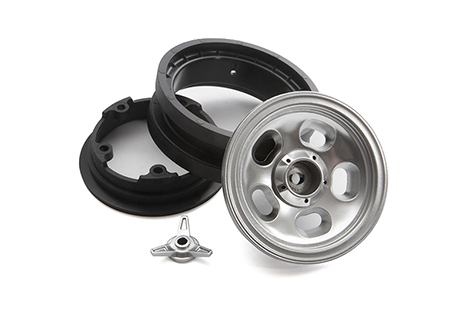 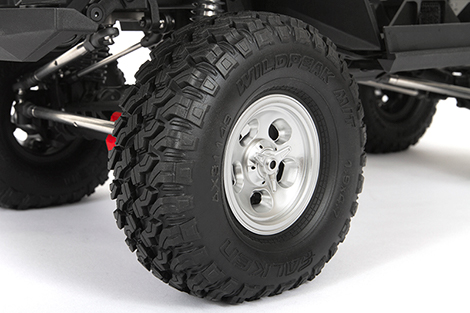 RETRO 3-PIECE BEADLOCK WHEELS
The Ford Bronco comes with 3-piece beadlock wheels that are scale replicas of period-correct “slot mag” full-size wheels. They not only complement the scale body but also allow tires to be mounted, removed, and replaced easily without gluing. Detailed “knock-off” style screw-on wheel caps are also included.
1.9 FALKEN WILDPEAK M/T (R35 COMPOUND) TIRES
The Falken WildPeak Mud Terrain tire has made a name for itself in the off road industry with tremendous success in competitive rock racing. Falken did their homework when diving into the Mud Terrain tire market, working with industry insiders to develop aggressive treads that provide amazing traction on many surfaces. The Axial version of the Falken WildPeak M/T tire stands 4.7” tall with a width of 1.5”. The extra height of this tire will offer additional ground clearance for those tough trails. 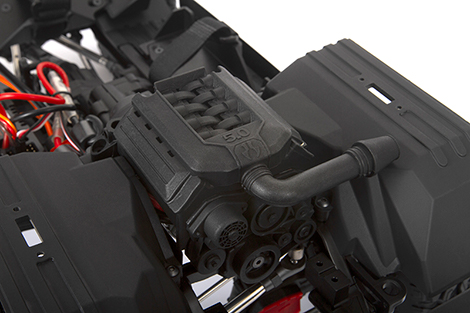 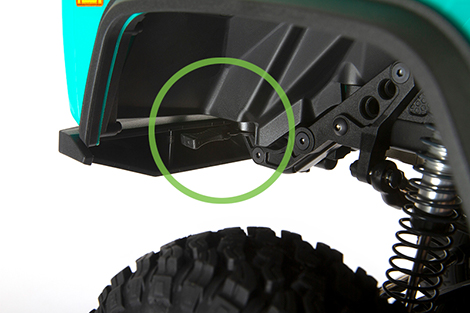 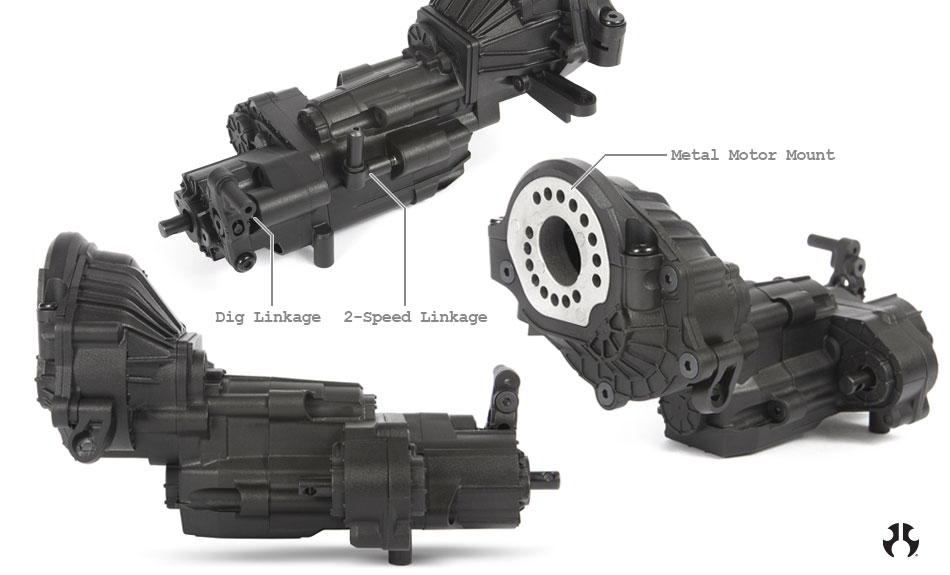 FRONT DIG TRANSMISSION & TWO-SPEED OPTION
Out of the box, the transmission is set up with a third-channel Front Dig function that lets you lock the rear axle from the transmitter. This acts like an anchor, allowing the front drive to pull the vehicle around in tight locations and dramatically increase maneuverability. Or you can configure it for two speeds with high and low gears by moving the included Micro Dig Servo to the two-speed linkage. To use both the two-speed transmission and Front Dig features, just add another servo and a radio with at least four channels (such as the 5-channel Spektrum™ DX5). 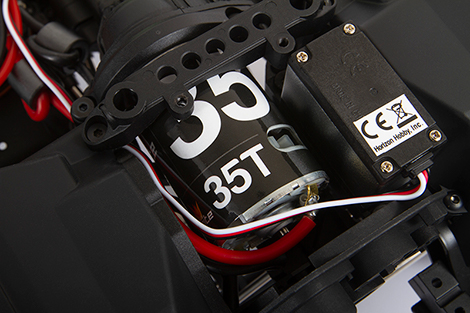 FRONT-MOUNTED MOTOR
The motor mounts forward in the chassis, under the V8 engine detail. It’s mated to a realistic transmission housing and transfer case, like a 1:1 vehicle.
SPEKTRUM™ 15KG METAL GEAR SERVO
This metal gear, high-torque servo with cast alloy servo horn is waterproof for driving with confidence in any weather and trail conditions. 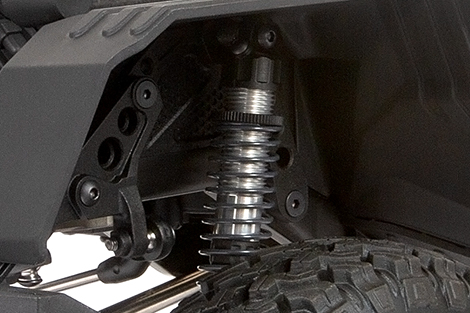 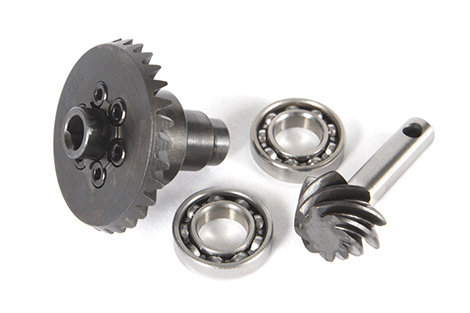 ALUMINUM ADJUSTABLE COILOVER SHOCKS
The oil-filled shocks have hard anodized, threaded bodies, a single coilover spring, plus an emulsion-style cap with screw for easier rebuilds. The shocks are tunable for achieving the best dampening rate. Their increased bore size also creates more fluid volume for better performance.
HI-PINION GEARS
The ring and pinion gears are machined steel, including the locker. The design utilizes a six bolt design for durability. 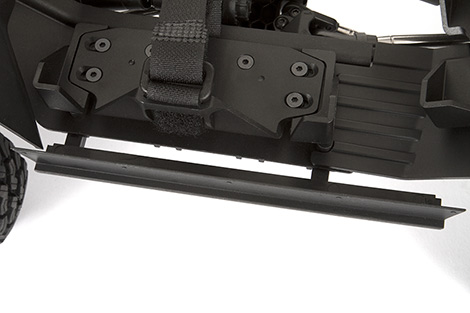 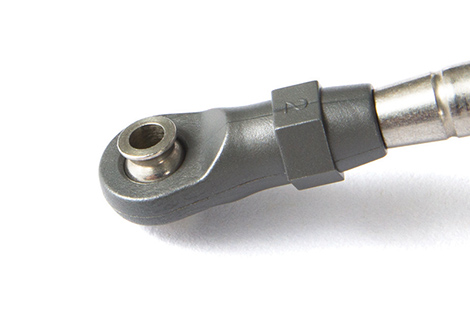 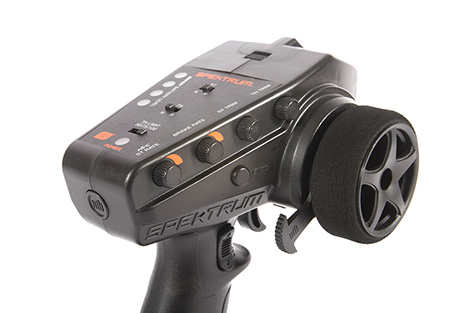 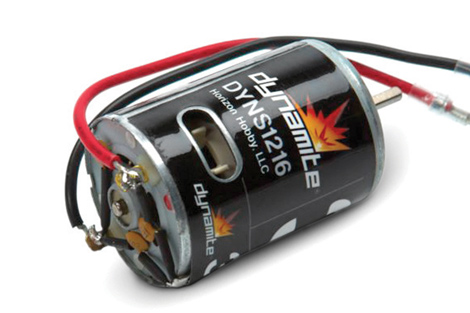